Chlorosis:
Chlorosis presents itself as a pale discoloration of foliage. It can be caused by a few different problems, but here I'll address the two most common. First, there can be a definite lack of nitrogen and/or iron available to the plant. Either the plant isn't getting enough fertilizer, or it lacks the amount of light necessary to utilize those nutrients. Another common cause of chlorosis in African violets is what is referred to as "pH lock-up." In simple terms, when the pH of the soil is extreme (either too high or too low,) the plant's ability to utilize and convert nutrients for use is severely compromised. Basically, a chlorotic plant is starving. If the plant has not been given a regular fertilizer, begin a regimen after repotting into fresh soil. Do not be tempted to use higher concentrations of fertilizers; this will put the plant into shock and potentially burn the foliage and/or kill it. If you already use a fertilizer and the plant is getting good light, check if a pH issue is to blame. The soil and water should be tested, but be sure to test the water AFTER you have added your fertilizer, since this will affect levels. 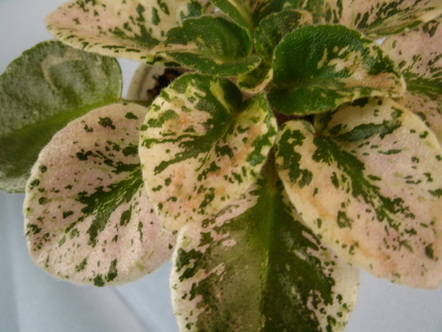 The browning effect seen in this photo is fairly typical of the damage you see when watering a heavily variegated plant with cold water. The whiter and pinkish areas of the leaf are usually much more sensitive to water temperature than the green parts. The damage is not usually limited to one area of the plant but is instead wide-spread over most leaves. [When damage is limited to the crown and is accompanied by orange crust/discoloration, the problem is caused from fertilizer burn. See Below.] The damage caused by cold water is not reversible, and the only way to prevent it is by using slightly warm or tepid water. Hot water will also cause damage, so don't be tempted to swing to the other extreme.

African violets are sensitive to over-fertilization. Usually this means that the dilution rate was too high. Using more fertilizer in hopes of producing more blooms or greener foliage will usually backfire. The baby leaves in the crown of the plant are the first to show signs of fertilizer burn, as you can easily see in the following photos. The residual orange crust from the fertilizer salts builds up in this growing apex, leading to visible discoloration and eventual leaf damage. If caught early, you can very carefully clean the leaves with warm water and paper toweling, rinsing away as much of the crust as possible without allowing water to build up and remain in the crown. At any stage it is imperative to leach out the pot until the water runs clear. Suspend fertilizer use and leach again in another week or repot the plant into fresh soil. To prevent fertilizer burn in the future, cut the recommended fertilizer dilution rate in half, especially if you wick water your plants. Also, avoid fertilizing young or baby plants until their root system is more developed. 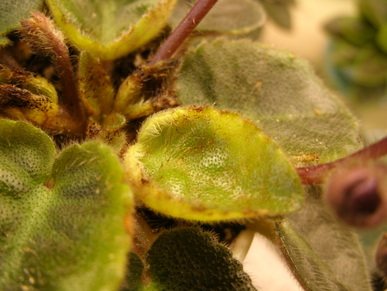